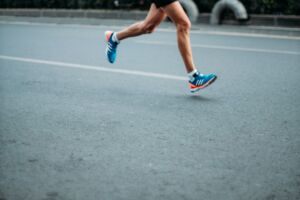 Have you noticed that people seemingly tend to be running a lot more these days? Maybe it’s due to the closure of gyms or people looking to get some fresh air to stave off the cabin fever, it’s like everyone is in more of a hurry. In fact, an Auburn University and University of Memphis study suggests that out of 1,100 respondents, about forty percent of them stated that they were running more.

While running is good to keep the body active and the blood flowing, it’s important to do it correctly and safely. One way to build up resilience so that you’re less likely to tire yourself out to the point of exhaustion is by practicing strength training. By exercising each muscle group, the tendons become stronger and stiffer, becoming springs of sorts that force the muscles to work harder and, therefore, become stronger.

If you’re someone who is middle age or older, you may wish to concentrate on calf muscles first and foremost. You can try something like seated calf raises while holding something weighted on the knee and then moving up to standing raises. The calf muscles often become the ones that begin to lose function first as a person ages so it’s a good idea to ensure that they are remaining in shape. While other muscle groups don’t have as great of a priority, do keep in mind that lunges and squats will assist with running stability.

As for the performance, try and increase it incrementally, around ten percent. If your aim is to run ten miles, for example, try and run four to six miles about three times a week.